The search for Ethiopia’s abducted children held in South Sudan

Four of Nyardhan Girmal’s children were kidnapped from their home in Lare village last month in an attack on Ethiopia’s Gambella region that left more than 200 people dead.

They were among 149 children abducted in the raid by members of the Murle community who took them across the border to South Sudan, along with livestock they stole.

Ms Nyardhan’s youngest, 11-year-old Jany, has recently been rescued, but her other two sons and her daughter are still being held captive.

“I didn’t believe that I would see him ever again,” she says, feeding him by hand.

“I am really happy to have one of my children back. It is a blessing and it is thanks to the on-going rescue mission.

“I have been worrying day and night about my children, that I might never ever see them again. I am still waiting for the others.”

At least 53 children, the youngest being three months old, have so far been rescued in the Ethiopian army’s on-going mission inside South Sudan.

They are from the Nuer community which has a history of ethnic clashes with the Murle – often linked to cattle vendettas.

Jany told his mother how he was locked alone inside a hut, surrounded by heavily armed men, and given only milk to drink during his captivity.

Like many other rescued children, he is now at the guest house of the region’s president where they are receiving food and medical attention.

“We have established that these children would have been sold or exchanged for heads of cattle inside South Sudan,” says Gatluak Tut Khot, Gambella region president.

“But we are not going to rest until we get them all back home,” he adds.

Outside the guest house a group of women are sitting under a tree singing and clapping.

In front of them five boys are going round and round in circles dancing to a popular tune sung by the Nuer of Gambella.

Among them is 27-year-old Nyamak Oukuch, with 18-month-old twins on her lap – her niece and nephew.

Two other children are playing by her side – they are also the children of her elder sister who was killed in the attack on 15 April.

“I don’t know where the eldest is. He was also taken and is probably with the Murle,” she says.

Many of the freed children are severely malnourished and need urgent medical attention.

Officials from the UN children’s agency and government are jointly providing medical help, counselling and basic necessities for the children, their families and caretakers.

“Whenever children undergo hard conditions like this – separated from their families especially violently, and they are staying with complete strangers for something like three or four weeks – they feel completely let down and some of these experiences last for a lifetime,” says Mike Charley, a Unicef child protection specialist in Ethiopia.

Lare was one of dozens of villages attacked by the Murle and is about 70km (43 miles) from Gambella town.

A strong smell of cow dung hits you on arrival.

We were told there used to be thousands of cattle in the area but nearly all of them were stolen in the raid; only a few calves and goats now roam about.

There are several houses in the settlement but nearly all are now abandoned.

Some families have come back to rebuild their lives but most have decided to leave.

At least 22,000 people have fled their homes and residents say the unprecedented brutality of last month’s attack has left them fearful.

“I can never return to my home again. My husband was killed that day and my two children taken,” says Nyakuich Both.

“I have nothing left. Why should I go back there?”

On her forehead she has tied a strand of grass which she says is a sign of mourning for her husband, children and home.

“I have heard that one of my children was rescued and is now in Gambella town, but I have not seen him, the other is still in South Sudan. I don’t think I will ever see him again,” she says. 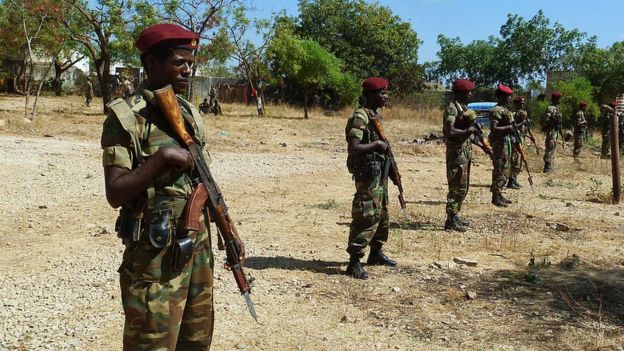 Like her, thousands of other villagers have now taken refuge in temporary shacks near the main road where they think it is safer.

Others have moved in with neighbours and relatives in nearby villages.

Two UN human rights experts, Maud de Boer-Buquicchio and Christof Heyns, have said communities on both sides of the border receive little protection from their governments and reported that increasing flows of smalls arms was making raids more deadly.

They said there was an “urgent need for an effective and well-resourced permanent presence at the border in order to monitor the area and prevent incursions”.

Mr Gatluak has assured Gambella residents that “they are now safe”.

“After we get our children and cattle back, we will seriously work on our border relationships,” the regional president says.

“We must teach the Murle that there is a better way of life than cattle rustling and stealing children.”

12 simple fixes for stubborn stains, from grease to grass