Rescuers in the Kenyan capital Nairobi are searching for people feared trapped after the collapse of a residential building in heavy rain.

A crowd gathered at the Huruma residential estate as rescuers dug for survivors. At least seven people are known to have died.

The Red Cross criticised “chaotic scenes” as rescuers arrived. It is unclear how many people are trapped.

Police chief Japheth Komme said that at least 121 people had been rescued.

There are conflicting reports as to whether the building had six or seven storeys.

The rainfall in addition has caused landslides, washed away houses and flooded roads.

Police said 14 people died in the Nairobi rains, including those in the collapse. Another four died when a wall toppled over.

Kenya’s KTN network said on Saturday morning that a nearby building was being evacuated in case it too collapsed. Across the city, more than 1,000 homes were affected by the flooding, Kenya’s Red Cross said.

Steven Oundo, the chair of Kenya’s National Construction Authority, told KTN there would be an investigation into whether the building had a certificate allowing people to live inside.

“The building went down during the heavy rains, but we still want to establish if all the procedures were followed when it was constructed,” Nairobi’s deputy governor Jonathan Mueke told reporters at the scene.

The Huruma neighbourhood is a poor district on the outskirts of Nairobi made up of narrow streets, meaning firefighters struggled to get to the scene and were delayed by large crowds.

After some time, the army took charge of the rescue with the help of the Kenyan Red Cross.

“We can still hear voices of people who are still inside,” Red Cross spokesman Venant Ndigila said.

Residents said that the building shook violently in the rain before collapsing. 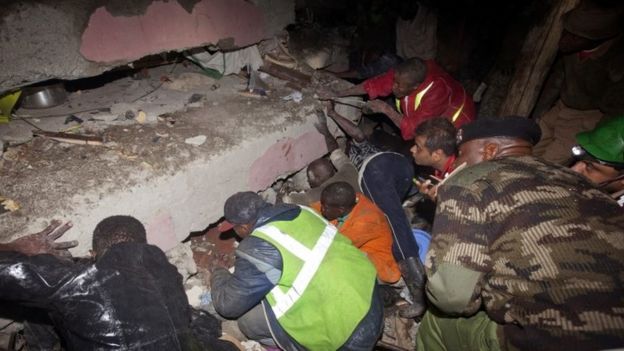 Poor building standards are a fact of life in Kenya, correspondents say. A survey carried out last year found that more than half the buildings in the capital were unfit for habitation.

The high demand for housing in Nairobi has led to some property developers bypassing building regulations to reduce costs and increase profits.

There has however been some good news for the rescuers who extracted a number of children from the wreckage throughout Friday.

President Uhuru Kenyatta last year ordered an audit of all the buildings in the country after a spate of collapses.

Meanwhile two boys are missing in another part of the flood-hit country after going herding, according to the Red Cross.

“I Will Shoot The Elephant ” – Prez Mahama