Floating airports: Could they finally become a reality?

Airports need a lot of space, but in the places most in need of air connections — islands and large metropolises — it’s a commodity that’s in short supply.

In search of solutions, planners will sometimes turn to the sea.
Huge land reclamation projects are an obvious route. That’s what was done in Hong Kong and Osaka to expand airport capacity.
Some visionaries have taken a rather different approach.
What if we could make a runway float over the virtually limitless flat surface of the sea?

Aircraft carriers have floating runways, but they’re also warships which need to be maneuverable and to travel at speed.
Their decks are too small to deal with commercial craft — even the largest carrier falls short of the requirements of modern jet airliners.
But let’s take the concept of the floating deck further.
What if we strip it of its engines and lower decks, anchor it in a set location, and then make it long enough and wide enough for a medium-sized airliner to land on it?
The result is a very large floating structure that’s neither a ship nor an island: It’s a floating airport.

During World War II, the British entertained the idea of building runways on icebergs in order to provide cover for the vital Atlantic convoys.
Project Habakkuk never materialized, but the floating airport concept lived on.
In 1995, 17 Japanese private firms, mostly shipbuilders and steelmakers, formed the Technological Research Association of Mega-Float with the support of the Japanese government.
The goal was to design and test a floating airport concept that, if successful, could be installed in Tokyo Bay — and the Tokyo Mega-Float is possibly the most ambitious attempt of its kind to date.
The project called for a floating structure with a 4,000-meter-long runway, enough even for large airliners.
A smaller-scale model with a 1,000-meter-long runway was actually built and tests proved that the Mega Float was suitable for aircraft operations.
However, the project did not go ahead and the structure was later dismantled.
MORE: 20 planes every aviation fan should experience.

Similar proposals have been floated, quite literally in this case, for San Diego, a city whose international airport has little room left to expand in its current location.
Proposals to build a brand new two-runway international airport in the sea, a few miles off Point Loma have been put forward by two different companies, OceanWorks Development and Float Inc.
Whether it was the $20 billion price tag that proved a bit too expensive, or lingering doubts about the technical feasibility of the concept, the fact is neither project has materialized. 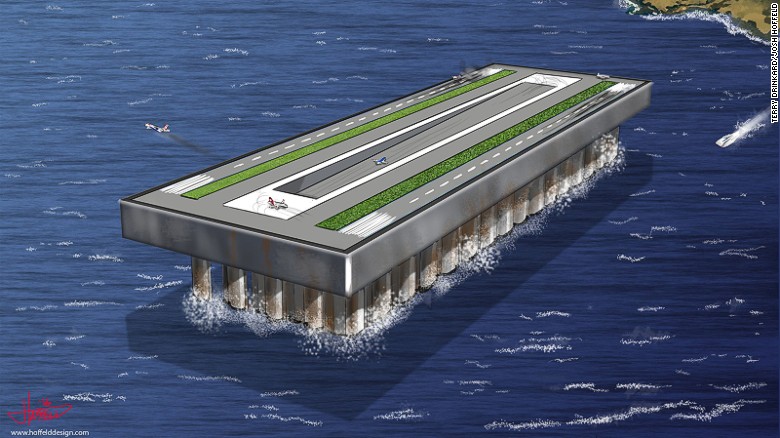 An artist’s rendering of Terry Drinkard’s floating airport concept.
The San Diego projects have some similarities with the floating airport concept devised by Terry Drinkard, an
American aeronautical engineer who has conducted extensive research in this field.
His scheme draws heavily from technologies and materials that have already been tested in the construction of deepwater oil rigs.
Drinkard’s vision is for a full-fledged offshore “aerotropolis:” a floating structure that, as well as being able to handle medium-sized airliners (of the Boeing 737 or A320 types), would also host a whole range of economic and research activities, from experimentation with renewable energy technology to aquaculture and yachting.
This floating airport would be energy self-sufficient.
Power would be harvested from the waves, from the sun and through ocean thermal energy conversion, a technology that produces electricity by utilizing the temperature differences between depths of seawater.
Its structure would provide a base for oceanographic research and aquaculture and it would also double as a port and recreational marina, while its potential offshore status could attract a host of other economic activities.
MORE: The airlines making stopovers sweeter.

A more daring version of the concept revives the idea, already put forward by a 1930 article in the magazine Popular Mechanics, of bridging the Atlantic with a chain of such floating airports.
This would enable all sorts of aircraft, including smaller airliners and private jets, to cross the ocean without the need to secure costly ETOPS (extended-range twin-engine operational standards) certification or take the more indirect northern route through Iceland and Newfoundland.
But the most realistic chances for a floating airport might be found in warmer waters.
Commander Bud Slabbaert, aviation consultant and Drinkard’s partner in this project, says a small-scale version of the floating airport is currently being evaluated by several governments and infrastructure operators in the Caribbean.
It’s a region heavily dependent on air transport where the lack of space is compounded by some of the islands’ hilly or mountainous terrain.
Other aviation experts remain a lot more skeptical when consulted about the feasibility of the concept.
R. W. Mann, a consultant and former airline planning executive with several U.S. network airlines, thinks such an project is highly unlikely to get off the ground due to the relatively high cost and limited practical gain.
“Projects that involve building runways on the sea, such as those currently underway in the South China Sea, are driven primarily by non-economic considerations,” he says.

It’s true that airports are a massive investment — even more so if they have to be built over water.
So it’s no surprise that, despite the concept of a floating airport having being around for a long time, it’s failed to come to fruition yet.
Despite decades of increasing air traffic and sprawling urban development across the world, airport relocation is still a rarity — Hong Kong did it in 1998 and Munich did it in 1992.
In London, the controversy about the future of Heathrow airport, one of the most congested major air hubs anywhere in the world, has been raging on for years.
Some of the most remarkable proposals to sort out London’s air capacity problem involve relocation to the Thames
Estuary, where the River Thames meets the North Sea.
Renowned architect Norman Foster came up with the concept of a four-runway airport to be built from scratch on the Isle of Grain, a marshy area some 30 miles east of central London.
The project was popularly known as “Boris Island”, because former London mayor Boris Johnson was one of its most solid backers, but it was rejected by the UK Airports Commission in 2014.
MORE: The huge ghost airport where planes to go sleep 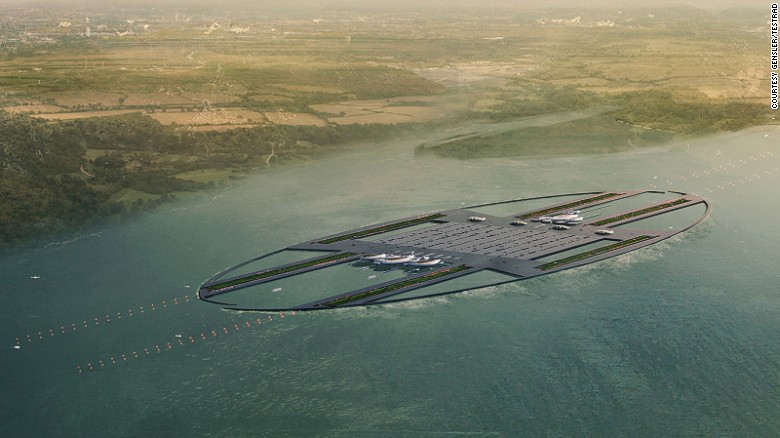 Gensler’s proposal for southeast England’s airport expansion.
A rather more ambitious proposal was put forward by the architecture firm Gensler and Thames Estuary Research and Development (Testrad), calling for the airport to be built right in the middle of the estuary.
In this vision, a six-runway airport would be built over the waters of the Thames Estuary at a cost of nearly $63 billion.
The runways would stretch parallel to each other on both sides of a central core, where the main terminal would be located.
The airport would be connected to land through underwater tunnels for high-speed rail connections.
Gensler considered two options, explains Ian Mulcahey, the firm’s managing director.
The first was a floating structure along the lines of the Tokyo Mega-Float, but the water in that area proved too shallow.
So it opted for a “polder”-like concept, where dykes would be used to delimit the area of the airport and water would then be drained to create a dry, flat surface.
“Although it might sound challenging when compared to building on dry land, by building the airport in a body of water we can get away with the lengthy and costly process of gathering the huge expanse of land you need for a project of this size”, says Mulcahey.
He insists the final decision about London airport expansion has not yet been taken.
On June 30, the UK’s Transport Secretary Patrick McLoughlin announced that following the UK voting to leave the European Union, such decision-making has been delayed until “at least October.”
So while an extra runway at Heathrow and Gatwick is by far the most popular solution being debated, don’t write off the Thames estuary gateway just yet.